The thing everyone hates about downwinders are the car shuttles. You have to sandwich the pleasure of the downwind run between lots of driving and organizing logistics with your partners. What if you could do a quick solo downwinder in little over an hour without the car shuttle production?

Well, it's possible and it's the downwind run I do most often. The route isn't a traditional downwinder where you launch from point A and finish at point B. It's actually an out and back - now before you jump on me for this not being a downwind route, my rationale is that it allows me to get in a nice downwind leg while the upwind portion is made much easier since a good chunk of it is in sheltered flat water. The route takes advantage of Toronto Island to provide shelter for much of the upwind legs. It's by far, the most convenient downwinder I do. A downwinder becomes something you can squeeze into your schedule rather than having to book much of the day for it.

The launch is just a few minutes away from downtown Toronto at Cherry Beach. It works great in SW or NE winds of 15-25mph. Beyond 25mph, the 1.8km of upwind legs in exposed waves gets challenging.

In a SW wind, the 1.2km distance from the launch at Cherry beach to the Eastern Gap is in exposed upwind conditions. Getting into the Gap provides welcome shelter from the worst of the wind and waves although it's still pretty choppy with confused bumps in there due to wave reflections off the concrete walls. Once you enter the Inner Harbour, once again you're hit with wind and waves but it's only 0.6km to the calm of the Island lagoons. You enter the Island lagoons at the Ward's Island ferry dock - make sure to stay well clear of the ferry. The 2km paddle through the scenic lagoons is in pleasant flat water although it's still upwind. You pass a couple of yacht clubs, the Toronto Island farm/zoo and Centreville on the way. Just before reaching the boat rental dock, exit the lagoons and portage about 200m to the beach at Centre Island pier. From there, it's a 3.5km downwind run back to Cherry Beach. 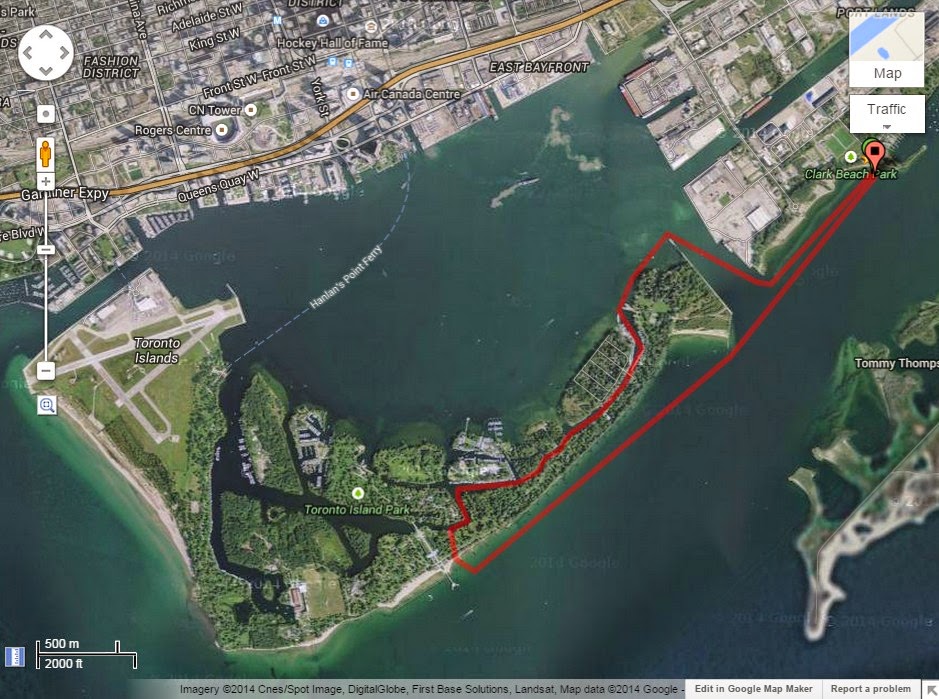 In a SW wind there are some pretty good sized waves on the first part of the downwind run along the south side of Toronto Island where the water is shallower. However, if the wind is SSW, expect reflected waves off the Island walls to confuse the waters there. Once past the Eastern Gap, the waves get a bit smaller until you finish at Cherry Beach.

One option for a longer paddle is to do a double loop of the Island without returning to Cherry Beach in between loops. This gives you proportionally more downwind distance relative to the exposed upwind paddling distance. It also doubles the most fun part of the run between Centre Island Pier and the Eastern Gap. Here are the stats on a single versus double loop run:

In  NE wind, the reverse route can be done. The bumps are a bit smaller since there is less fetch and groundswell - although the waves get steeper as you approach shallower waters near the downwind finish at Centre Island pier. If you go in a NE wind, make sure you're confident that you can make it back home going upwind.

Argosi
My home base for SUP is the Toronto Windsurfing Club at Cherry Beach.